And the show continues

I finished two of the four tracks that I’ve been working on since last week and decided to release them online, a trend that I’ll be following every couple weeks or so. You can check out the following two songs on YouTube and richy923.com.

“Insomnia In Song” turned out EXACTLY how I wanted it to be; dark, heavy, slow… and I feel it was fitting to release it along with the bright, perky-punky, fast tune of “Califormula”.

For “Califormula”, between the new version and the demo version I released back in September, I modified the lead guitar to be a little more catchy, redid the bass, fixed some vocals and did an overall remaster of the song.

For both songs (and pretty much the whole record), the real challenge for me has been playing more lead guitar. Punk power chords can only get you so far. I try to sit with my guitar for an hour or so everyday just messing around trying my hand at playing solos and shit. I definitely need more practice.

Also on the front, besides finishing the recordings “A Night On The Town” and “Her Name Here”, I’ll be going back to face:the.music to shoot a couple videos for “The Diffusion” and “Running With Roses”. It may be a little ass-backwards, but I’ve been dying to see those songs translated on screen. 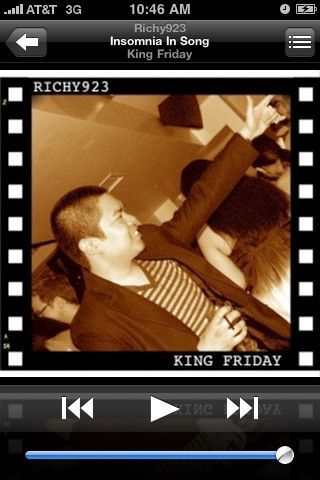 Okay, so maybe I was overly ambitious setting the release date for 11/13. Fact of the matter is, I kinda got tied up with work, paying some bills… ::ahem:: the social scene… and recovering from a cold.

During the last two weeks of September, I was heavily concentrated on this record and ended up kinda stressing after that from some more studio/technological issues. But after a few weeks getting my head clear, I’m ready to dive back in to my King Friday project. So the new release date? Not gonna get too specific, but I’ll say mid December.

This week, I’ll be laying down 3 tracks (sans vocals, until my voice is 100%) “A Night On The Town” “Insomnia In Song” and a newly written piece called “Her Name Here”.

In the meantime, I’ve re-uploaded “Promise Me This” on to my Myspace Music page http://www.richy923.com in light of my brother’s new freestyle project he’s working on. Check it out 🙂