Spotlight: “The Wake-Up Call” by The BackPackers

Once you press play, The BackPackers take you for a ride around the Rockland suburbs and beyond, singing songs about girls, love-lost, partying and the love for hip-hop itself. Sure those topics are a dime a dozen in the genre nowadays, but these two are smart about it and do it with zero gimmicks.

Notable tracks: “Untouchable”, “Breezy” and “A Beautiful Life” (and thanks for the shout out in “Up!” haha).

I really don’t like to take credit, but both E.dot and Johnny say I was one of the reasons they got into hip-hop when I was rapping and doing beats back in the day, and now they’ve gone and done it the RIGHT way. THIS is hip-hop. Fresh lyrics, smooth beats, “The Wake-Up Call” is a perfect soundtrack to let rock for a Saturday afternoon… pssh, maybe all weekend. Hell, the whole year. Awesome job BP!

Song Premiere: “It’s Not Karma If It Doesn’t Hurt”

Sunday morning was another release from the King Friday album; the first official single “It’s Not Karma If It Doesn’t Hurt”. You can download it FREE here: www.richy923.com/_music/itsnotkarma.mp3 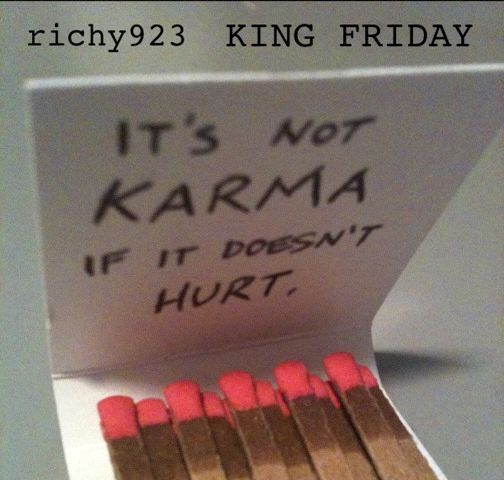 ———-
“It’s Not Karma If It Doesn’t Hurt”
(Written, Performed and Produced by R. Salgado)
from the album King Friday

I’m gonna lie and say that I don’t think about it
Was it that long ago?
Maybe it has to come and bite me in the ass
Just to come full circle

Answer a question with another
Delay inevitability
I don’t know if it’s pretend
Anti-Love, she thinks about me

It was never really worth it, I’m sure
A familiar taste in her kiss
And it came back to haunt me today
Anti-Love to make you sick

King on the Horizon

Getting back on track (for like the 4th time) I started production of 2 new tracks this past week: “It’s Not Karma If It Doesn’t Hurt” and the intro “The Breaking”.

‘Karma’ breaks from the traditional verse-chorus-verse-chorus lyrical structure, it’s an upbeat punk style with a little bit of rapcore for some of the breaks… and a tad of surf-style guitar. the vocals can be comparable to “Rush” from face:the.music.

‘Breaking’ is somewhat of an epic introduction to the album. it’ll be in 3/4, mainly instrumental, following these lyrics:
—–
“The Breaking”
by Richy923

More to come in the next week.