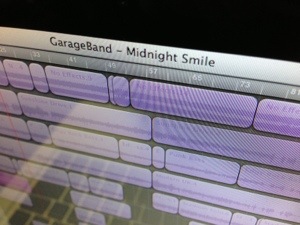 First off, I love how Myspace’s “custom wallpaper” looks absolutely NOTHING like the album artwork for face:the.music. 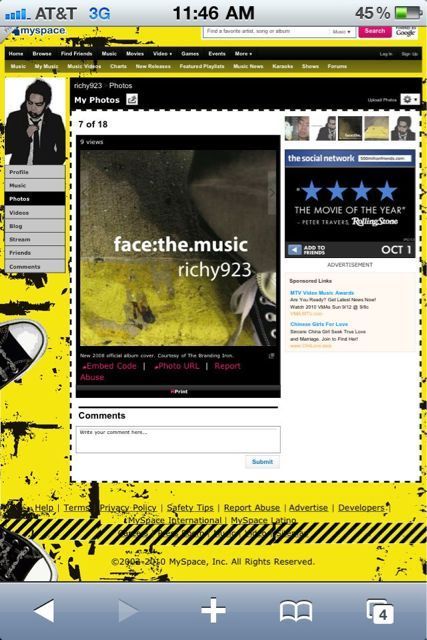 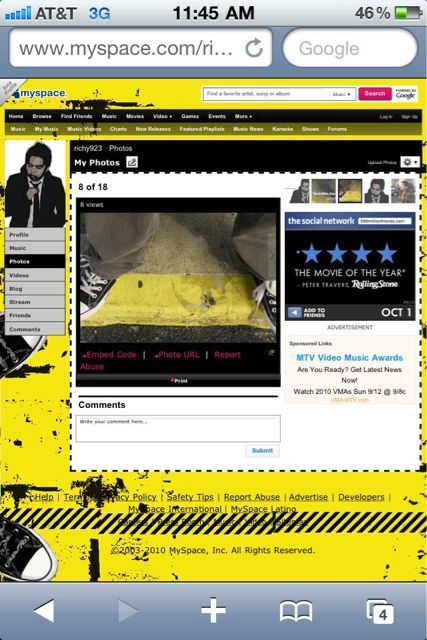 Now as for the production for King Friday, I have 4 more tracks to go before I can start the mastering process for the CD.

Hopefully I can cut two a week, master by the third week and be ready for the release by the infamous date of Sept. 23 (9/23)! Not likely, since there’s more to be done after the mastering; new distribution methods, marketing, etc.

But in the event I am done before then, I’ll have it available for a free download for Facebook friends on 9/23 and plan a US release through iTunes, Amazon, Napster and Rhapsody by Mid-October.

In the meantime, I’ve been doing the typical “check out this song” posting on Facebook and Twitter. I’m sure it’s probably annoying to some of my friends on there (maybe they consider it spam or whatever) but shameless plugs are part of the gig being a one-man band. It’s just gotta be done. Some of my “friends” either don’t know that I make music or they’re checking their Facebook on mobile devices, so my music posts are pretty much hit or miss. But I do wanna say thanks for those who have given feedback, through FB Likes and retweets, your feedback lets me know I’m doing the right thing.

Okay, still no luck with the mixer. In the meantime, I’ve figured out how to share my music widget:

Sorry. Um, I finally setup my recording studio in my new apartment in the lower east side of manhattan, and also got myself a new guitar: an Epiphone Les Paul: Special II, which I named “Epiphany”. Quite the sexy.

I’m still writing the lyrics for most of the new record and I got a case of the ol’ writer’s block again.

And on the “face:the.music” side of things, check out the house remix of Rush!

So to my surprise, I checked the iTunes music store on my iPhone on Friday, and found this while searching for “richy923”: 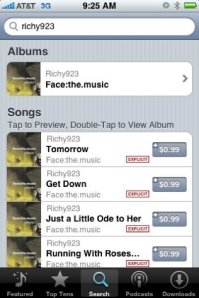 So… that, along with the official CD booklets that came in the mail: 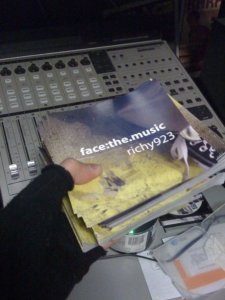 It’s safe to say that “face:the.music” is officially for sale!

Here’s the link to the iTunes Music Store:

Everything is almost in place… It’s just a matter of time… and marketing now.

-I now own “Trackburner Records” as an official legal business
-Artwork has been finalized
-First batch of 100 CDs have been pressed
-Currently waiting for album artwork booklet printouts serviced by Uprinting.com
-Tracks for “face:the.music” have been copyrighted
-I’ve signed on to TuneCore.com to get the album on to iTunes, which should be ready in about 3 weeks

Once the final finished product is in my hands… I can go about setting up for this damn concert/record release party. 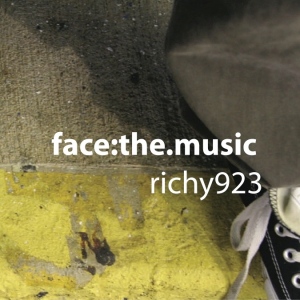 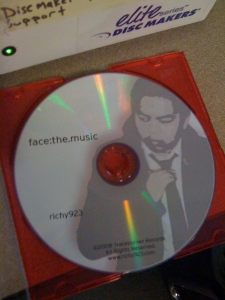 And here we have it: the new album cover for face:the.music.

What Roz came up with took me by surprise. It’s simple, yet abstract at the same time. On the drive to the shoot locations, we listened to a rough mix of the album and I discussed with her “I’m looking for something that captures the entire essence of the record, musically I mean. Since there’s a lot of different genres I play…”

Cut to two weeks later, she presents this to me and says “I like it… It’s gritty,” like some of life’s situations. It’s got both a rock and a hip-hop feel. Thanks Roz, it’s awesome. 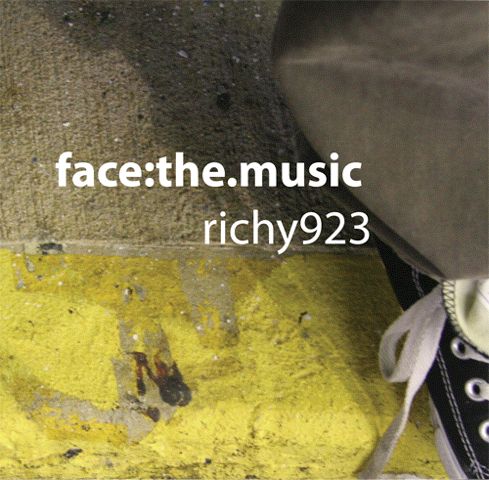 So, the mastering process is now finished and today Roz and I will be finalizing the artwork design.

I’m trying to come up with the initial cost of duplication… How many hard copies do I really need? I’m hoping to make most of my sales electronically through services like iTunes or MySpace, but also I plan to have copies readily available during next month’s concert. I’m guessing around 300 to 400 copies might be enough. All of that, CD duplication, printing on the CD and printing I the artwork/casing might end up costing me around $300… Not bad… and I’ll sell the CD for $10, maybe $5 for the first 2 weeks… I’ll be able to raise enough money for this concert.

Let me just start by taking a moment to recognize a dear family member of mine who passed away last week: my uncle / my father’s best friend / and father of fellow artists and entrepreneurs such as DJ Ren the Vinyl Archaeologist, Anthem Salgado, Leonard Salgado of Lion & Rooster and E.Dot Fresco of The Backpackers.

As we slowly try to get back into the groove of things, this week I will be final mixing and mastering face:the.music. Early last week, I met with Roz to review the album artwork, and I am very pleased with what she came up with. The new cover will debut here next week, with the CD release to hopefully follow the week after. 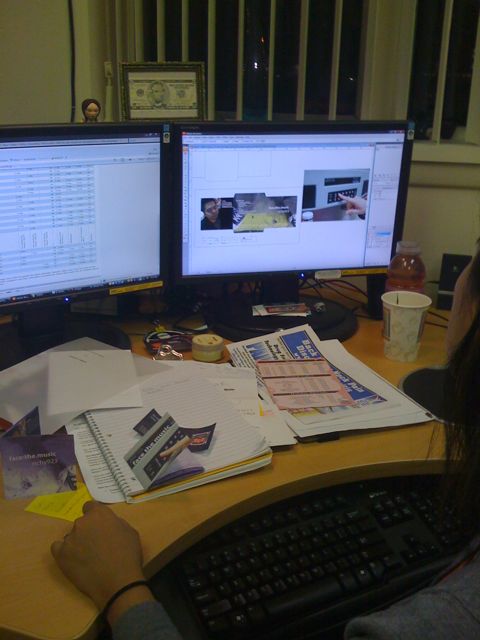 Saturday afternoon marked the final day of recording for the new album… I’m really excited that everything is finally coming together. Saturday evening, I met with creative designer Rozlilia Friend of The Branding Iron design company for the photoshoot for the album artwork. A new cd cover is in the works…

So all this week, I will be mastering all the tracks, and the album should be ready for the presses by this Saturday.

The recording may be done, but the journey isn’t done yet… Concert planning, finding/training session players, and distribution are still on the road ahead, but nothing is as important as reaching other people’s ears…

This is gonna be fun…

Since last Friday, I’ve been in the studio cutting tracks.

Saturday morning, I released my new single “Running With Roses” on my MySpace music site, (www.myspace.com/richy923)

And earlier today, E.Dot released a new exclusive hip-hop I produced “Trackburner 2009” featuring him and myself. (www.myspace.com/therealenmusic)

So far, production of the new record has been really smooth, averaging about 1 new song a day. Previously released songs such as “Rush” and “I Need Today” have received new treatment, based upon how “Running With Roses” came out.

I should be done recording by Saturday, and I will be with a talented graphic designer from The Branding Iron, LLC to work on the album artwork. Possible photoshoots in downtown manhattan.

I’m really pleased how things are coming together… but now I must take a break, spending time with family and friends on this beautiful Thanksgiving weekend. Happy Thanksgiving to all!

So last night, I decided to track the first rough cut of “Running With Roses (Death of Desperado, Part 1)”… long title, huh?

I got mixed results.

Originally aiming for an brighter, emo sound, the end result was a hybrid between some heavy linkin park and nirvana… this song is heavy… a little too heavy for me.

I began tracking guitar (direct-in), applied some amp effects… and next tracked drums with my trusty Roland TD-3, and layered on some bass grooves and finally screamed my ass off on my C1000 condensor mic… Added some background vocals, did some minor pitch shifting since my 1am singing voice can be compared to the likes to William Hung…

I still have the next few nights to tinker with the sound some more, But maybe this song was born to be heavy… It’s different from the stuff I usually play, but this album is all about diversity, so it could be a blessing… The final version should be up by Sunday.

Putting The Pieces Together

So… after the past month of tinkering around with new melodies and drum beats, I’ve finally put together the final 4 rock songs… Now it’s just a matter of tweaking out the structures, and actually laying them down in GarageBand.

I’m stoked to have the last 3rd of November off, so I can finally lock myself away in my basement studio and bang out these tracks.

I’m gonna try to have the new single “Running With Roses (Death of Desperado, Pt 1)” on myspace by the end of the week, with a video possibly up after the weekend.

Last night, I held a mini jam session to break the ice on collaborating with my cousins E and Young13, together known as The Backpackers.

They aren’t just my younger cousins… These two cats have stepped in the same path I started in, and they’ve already made names for themselves by taking the musical movement another step further.

They are definitely worth your time:
myspace.com/therealenmusic

We’ll be working on about three tracks together: “Intro/The Diffusion” “Face The Music”… also a special bonus track that’ll finally appear on myspace after about 2 years on standby… it’ll be more than meets your ears.

check out some snippets from last night’s jam session… (pics courtesy of E.) 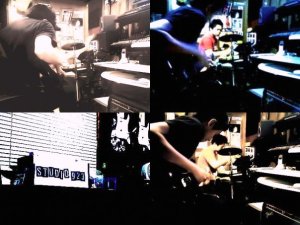 It’s always this part of production I hate… filling in the little gaps. Sometimes it’s what makes the record count. I spent most of the weekend tweaking some of the lyrics, for content as well as making it fit with the melodies. But I seem to get stuck. Maybe I’m thinking too hard. It becomes one of those “if it ain’t broke, don’t fix it” kinda things.

It’s a beautiful sunny day out here in TriBeCa, and I’m hoping to catch some wind of inspiration to cure this freaking writer’s block. If anyone is out there who enjoys writing… I’m curious to know what gets your gears in motion.